In his book, The Life of Greece, Will Durant refers to “minds that have been filled and sharpened by a free and varied life.”  I think if we allow our lives to become static, our minds will dull.  There are many ways to avoid this – reading, meeting new people, engaging in new experiences.  My favorite way is travel; for me, it combines all of these.  Toss in trying to learn a bit of a new language and bam! sharper mind.

This year I went to Greece.  Greece doesn’t have the funding to preserve all the history there and it’s important to me to see if before it’s gone.  Or before I am.  I regularly remind myself of Emerson’s words, “We are always getting ready to live and never living.”  Will the world be safer in a year?  In 10?  I put this trip off because I wanted to see the Parthenon without scaffolding on it.  Trust me, at the rate the Greeks are going, it will have scaffolding on it for the rest of our lives.  If you wait for the perfect time to do something, you’ll never do anything.

I stood on the Acropolis and imagined what it was like in its heyday, when it was truly the peak of civilization.  I saw the entire city below and the sea in the distance and thought of Gods.  I visited Olympia and stood in the stadium, climbed to the temple of Delphi where the entire ancient world travelled to consult the Oracle, and wandered through the remnants of Sparta.  I met the warm and beautiful Greek people, struggled with the language, and loved the food.  It made me realize how little I know; how big the world is and how absolutely beautiful.

The Greeks also have their problems. In Athens, they have given up the battle with graffiti and it gives the city the look of a war zone.  The garbage workers went on strike while I was there.  Taxes are incredibly high and people are struggling.  Many ancient temples and monuments are covered with the grime of pollution and decay and will not be around for future generations.

And it was hard for me to turn off my hard-wired American brain!  I loved the Greek people – they are warm and welcoming.  But there were so many opportunities to make the money they so desperately need!  Just one example: as you can imagine tourism is Greece’s bread and butter.  Millions of people from all over the world pour in to see the birthplace of western civilization.  But few museums had gift shops and if they did, all the books they carried were only available in Greek!  No offense, but the vast majority of visitors can’t read Greek.  The greatest museums in the world make a fortune from their gifts shops and online sales.   Not in Greece.   Not hardwired like us Americans to hustle.

That’s what traveling to a different culture does – you not only gain insight into that culture, but also your own.  But there is a price for admission.  You have to think.

Recently a video went viral of a young woman taking a selfie at an art exhibit and accidentally knocking over several of the display cases.  (Self-absorption taken to a whole new level.)  In Greece, there is no posing with the artwork in museums.  Bravo I say!  Focus on the artwork and not yourself!  Maybe even allow others to see the artwork.  Perhaps ponder the significance of the work and its beauty rather than obsessing over your own.  I get it – we all want to say, “I was here!” but don’t do so at the expense of the experience, at the expense of thought.

There were also experiences that could have been had anywhere, but since I was in Greece, I paid more attention.  One day a group of us decided to hike up to see an old church overlooking the sea.  (Greece is absolutely stunning with rolling hills covered in olive trees and gorgeous blue sea everywhere.)  The path into the hills was supposedly well marked, and we set off.  We’re talking, we’re laughing.  It’s a spectacular day and we are glad to be alive and in Greece.

After an hour or so, I notice our path looks overgrown, and I say I think we’re going the wrong way.   No one pays attention.  I’m pretty sure we’ve messed up, so I say something again.  We discuss this for a bit and the group decides I might be right so we backtrack.  Those of us in the back start “teasing” (aka blaming) those in the front for not paying attention.  They, of course, tease back saying no one put them in charge.  After twice passing it (and amid much razzing), we finally find the turnoff we missed.  The view from the top was breathtaking. 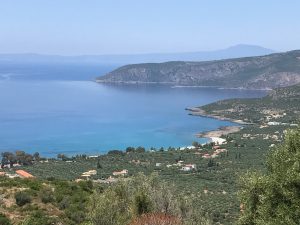 But what are the lessons my friends?

¨ Don’t mindlessly follow anyone.  At the end of the day, each of us is responsible for ourselves.

¨ Don’t assume the people you are following know they are leading.

¨ Don’t blame the leaders if things go wrong.  You gotta love what we did – we didn’t appoint a leader.  Then we blamed the non-appointed leader for our mistake.

¨ If you’re not willing to lead, then shut the hell up!  It’s easy to shove someone out in front, have them make all the decisions, then when things don’t work out as planned, blame them.  We do it in everything from sports to politics.  We do it to our spouses.  The world would be a much better place if we stopped.  Believe me, no one wants to screw up less than the leader!  You think the QB wanted to blow the game-winning play?  You think the Mayor wants to be reviled?  I try to catch myself when I’m blaming a leader for something.  They did they best they could.  And if I’m not willing to step up, then I need to shut up.  Maybe we should actually try supporting the people in the front. Now there’s a concept!

¨ Casting blame is not the same as sharing information or insight.  I had to say (twice) I thought we were lost, or we might have walked all the way back to the US.  You too are responsible for results and outcomes.

¨ Pay attention!  It’s easy to get lost if everyone is distracted.  (Can you say e-mail?)

Socrates said, “The unexamined life is not worth living.”  You don’t have to go to Greece to examine yours, but you might have to put down your phone.

THE FLAME THROWER
The free Firestar newsletter.
SIGN UP NOW

DO YOU BURN?
Denise’s book on motivation.
ORDER NOW